The Sakurada family are an average, everyday family, who live together in a regular apartment. However, there is one small abnormality: their father is the King! Monitored by over 200 surveillance cameras, the nine Sakurada siblings live their lives in the spotlight, their every move being watched by the masses on a dedicated TV network. When the King decides to step down from the throne, he decrees that his successor will be chosen by a public election, giving each of his children a single year to campaign their hardest and win the hearts and minds of the population. Campaigning for some will be easier than others, especially when each of the potential inheritors has a super-power, but for middle sister Akane, even the power to manipulate gravity won’t help, due to her chronic shyness and tendency to end up in embarrassing situations. Can she overcome her fears to become the new king, or will the crown instead fall into the hands of another super-powered sibling? 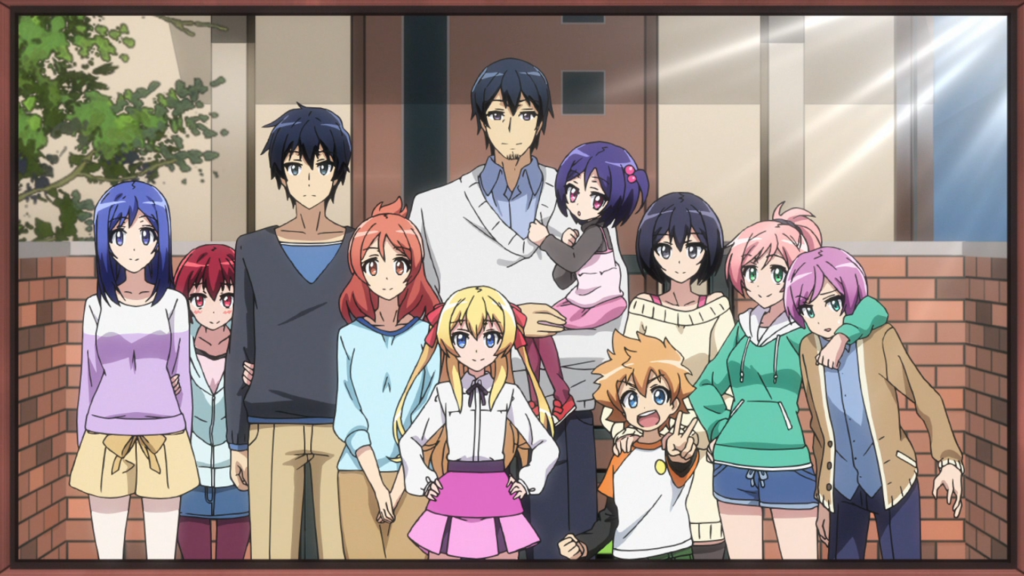 If you’re anything like me, you’ll read the above plot synopsis for Castle Town Dandelion, based on the 4-koma manga by author Ayumu Kasuga (artist on Gonna be the Twintail and Undefeated Bahamut Chronicle), and think something along the lines of “A super-power based 9-way battle for the throne? That sounds great!”, and indeed, it is what enticed me into watching this show in the first place. So, it was much to my disappointment to discover that the intriguing premise is squandered, placing Castle Town Dandelion firmly in the realm of total mediocrity, marred by several glaring issues. 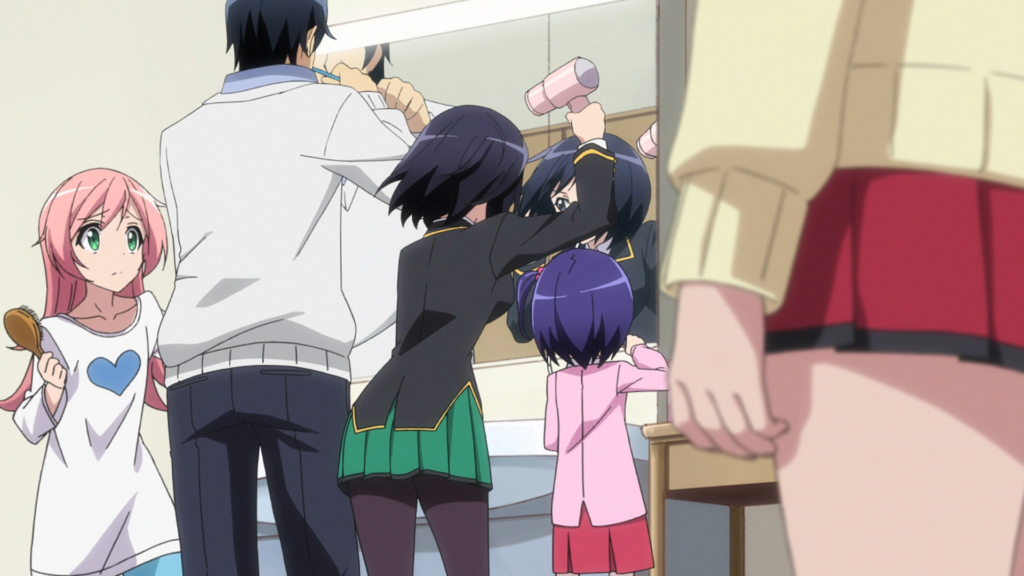 The most obvious problem with Castle Town Dandelion right from the off is the sheer amount of characters it throws at you. There are a whopping nine protagonists featured throughout, meaning you end up with a large but average cast, instead of a small but well developed one, which would have been a far better approach to take. Cutting the amount of leads from nine to four or five at max would have meant each individual sibling could have had more screen time to flesh them out, not to mention more time for us to gain an emotional attachment to at least one of them. A big gripe of mine with the leads was the total lack of any real motivation for the majority of the siblings, which could have enhanced the quality of the characters, something the series itself demonstrates with easily the best character, Kanade. Early on, we learn that Kanade’s driving force is in order to absolve herself of guilt, wanting to dedicate resources to healing her brother Shu, whom she injured in an accident when they were kids due to her power. It may not seem like much on the surface, but this tells us a fair amount about her; despite her somewhat hostile exterior, she is still a caring person. We learn that she harbours great feelings of regret and we also learn more about her creation power and the dangers it brings. Now, compare this to Akane, who wants to be King in order to banish the surveillance cameras because she doesn’t like being watched. Not only is this a paradoxical and nonsensical motivation, which the show itself points out, but even when we’re given context for it later on, it’s just not really very interesting, and this can be said about pretty much every other character, some having no motivation at all, making them bordering on irrelevant to the story. I’m not entirely sure how fitting it would have been, given the general tone Castle Town Dandelion seems to be going for, but an enormous omission and missed opportunity is the lack of any sort of antagonist. It definitely wouldn’t have hurt to make one of the nine siblings to be chasing the throne for personal gain or with some evil plan in mind. Not only would have this made the story about a thousand times more interesting, it would have given an implicit motivation to those who lack one. It seems such an obvious thing that I was honestly shocked we didn’t see this. 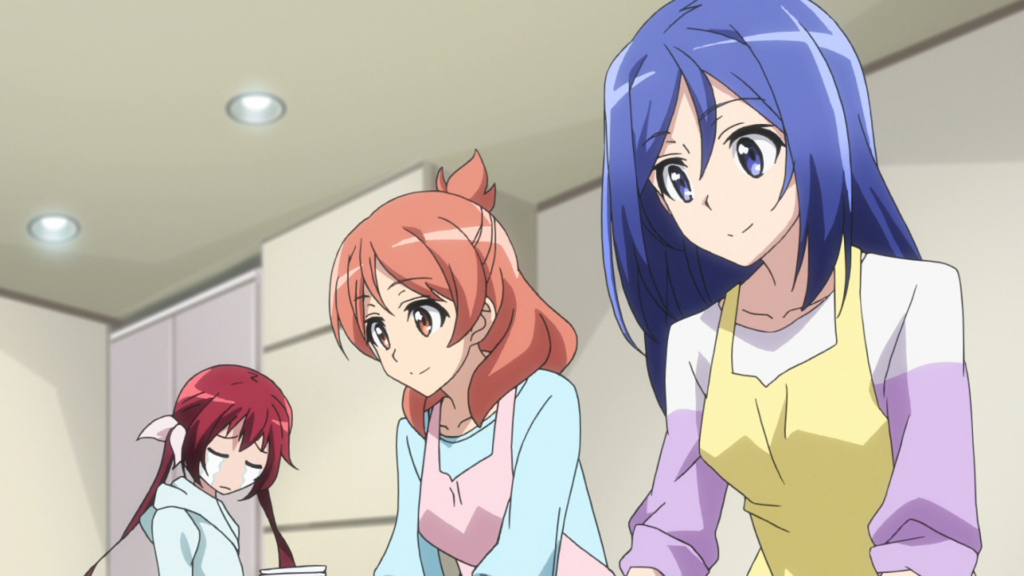 Despite my misgivings with how the character side of things was handled, all might have been forgiven if it was propped up by either the story or the comedy, both of which are rather lacklustre. There was a whole lot of potential in the super power-based campaigning, given the breadth and variety of powers we see, such as gravity manipulation, teleportation, item creation, the ability to talk to inanimate objects and cloning to name a few, but most of the campaigning consists of speeches and not a lot else and these mostly take place off-screen! Instead, we get more screen-time in the first half dedicated to totally pointless antics that do nothing to further the plot. Granted, it’s aiming to be a slice-of-life anime and plot is rarely a priority in the genre, but the fact it tries to have a story means I can’t forgive it for wasting time, and in the first half, you can go whole episodes with barely a mention of the election, which is just frustrating. Even the gags in these time-wasting episodes, which potentially could have redeemed them, are very hit-or-miss, rarely getting so much of a smile out of me, for reasons I can’t really pinpoint. What little story there is is crammed into the last half, which makes it a fair bit better than the first six episodes, but it just strikes me as too little, too late. Up to this point, I’ve been rather harsh on Castle Town Dandelion, but it’s probably worth mentioning that I don’t think I’d class it as straight-up bad. It is entertaining and I don’t recall being overtly bored at any point, it’s just disheartening to see such a cool idea so totally wasted when it could have been so much better than average. 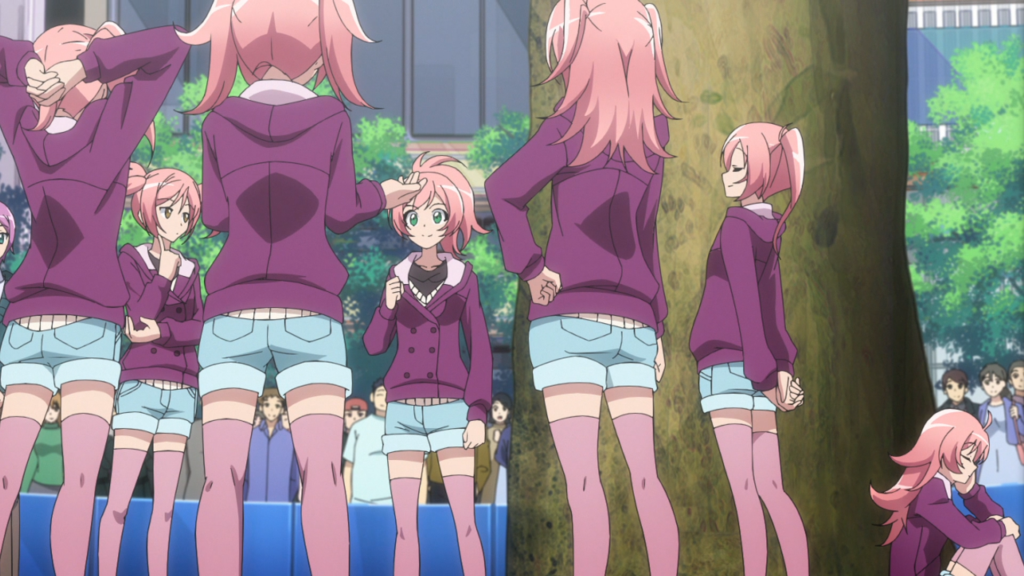 With anime such as Active Raid, Hundred and The Testament of Sister New Devil under its belt, Production IMS doesn’t exactly have the best track record for quality, however that doesn’t stop Castle Town Dandelion’s animation delivering an above average-looking show, full of vivid colours, smooth animation and reasonably memorable character designs, courtesy of Shinpei Kobayashi. 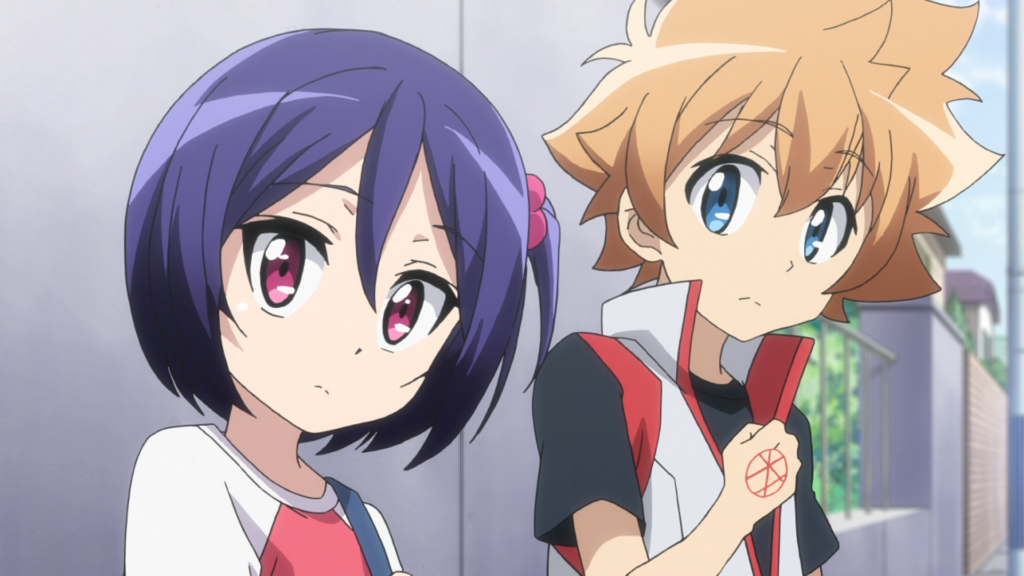 Anime Limited’s release of Castle Town Dandelion comes with both an English dub as well as the original Japanese audio, and honestly, I couldn’t bear the dub. I won’t lie, I lasted literally seconds, and found it to be instantly off-putting. Funimation’s dubs are normally quite high quality, so I was surprised, but from what I heard of it, I just wasn’t a fan at all, although this could just be down to me preferring comedy anime subbed rather than dubbed, so your mileage may vary. Fortunately, the Japanese cast is great, with legendary seiyuu Kana Hanazawa voicing the lead Akane, who you’ll no doubt recognize from something given her lengthy list of roles, including leading parts in Blue Exorcist, Angel Beats, Monogatari Series, Psycho Pass, Durarara and Nisekoi. The score is a collaboration between three composers: Natsumi Tabuchi, Shu Kanematsu and Takashi Ohmama, and does the job, but not a whole lot else. I did, however, really enjoy the OP, “Ring Ring Rainbow!!” by YuiKaori, an idol duo who voice Hikari and Kanade in the series respectively, and the ED, “HoneyCome!!” by Yui Ogura, as both are really catchy and memorable.

While there is a strong concept at the core of Castle Town Dandelion, there are so many issues dragging it down, such as the overstuffed cast and the total disregard for plot in the first half, that it makes it tough to recommend, despite the occasional glimpses of good.

It's a fair review with some solid points made...but even those it's got it's problems it's worth a watch especially if you like the genre

Yeah this is one of the shows that's decent for a first time, don't really see myself ever rewatching it tbh