Bleach is in its final storyline, as the Quincy leader Yhwach has now gained Godly ability and has sent his four strongest soldiers out to defeat the on-coming shinigami forces. This volume picks up with the end of the fight from the previous volume as Squad 12 Captain Mayuri Kurotsuchi looks on as his lieutenant Nemu delivers a near-fatal blow to the giant sentient hand known as Pernida Parnkgjas. It’s hard not to spoil this too much, but this is the last we see of Nemu for the entire volume… four pages in. This is odd as she is the cover character for this volume! I guess Tite Kubo really wanted to draw Nemu impossibly putting her own hand upwards between her breasts… Who doesn’t?

Anyway, two or so chapters in and that fight has been put in the books. We then get a series of shots of other Captains and Lieutenants running towards Yhwach, but they’re getting picked off one-by-one, leading to Captain Commander Shunsui Kyoraku to use his Zanpakuto’s abilities to “make children’s games a reality” in order to appear behind the sniper and find his position. The sniper in question is a member of the Quincy Wandenreich Sternritter Schutzstaffel (love writing that…) known as Sternritter X “The X-Axis” Lille Barro. He can pretty much see all and fire with insane accuracy, though thanks to Shunsui’s games, he is pushed to the limit and transforms using his “Quincy Vollständig”, which then in turn pushes Shunsui to final unveil his Bankai. 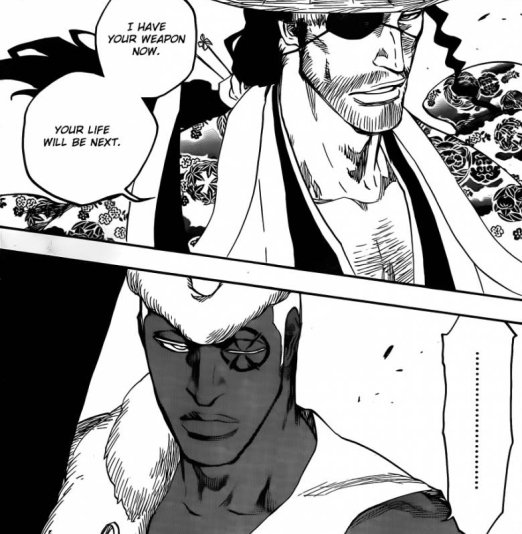 If you’d asked me what I wanted to see most in the final arc back when it was announced, I’d have put Kyoraku’s Bankai right near the top (along with Kisuke Urahara’s), so it was nice to see it after all this time, though I’ll admit it was a bit underwhelming compared to his regular release. This fight actually isn’t concluded by the time the volume ends, but it does dive into the backstory of Kyoraku and his lieutenant Nanao, who had barely gotten any screen time (or panel time, I guess) since the series began. It’s a nice extra layer to the characters, particularly Kyoraku, who has always been playing the cool laid-back guy without much else going for him.

There are also a brief few scenes of the other captains and lieutenants, as well as Ichigo himself, coming up against the last two of Yhwach’s Schutzsaffel, but these are mere teasers for what’s to come.

Say what you want about Kubo and how much passion he may or may not have had by the end (his message in the front of the book is “I received ear buds at a New Year’s party and remembered that my ears refuse to accept this shape of headphone”, so… Hmmm.) but the artwork and character designs are still great to look at.

So Volume 71 contains some long-awaited abilities and backstory of a beloved character and has some good fight scenes, and that’s about all you can expect as the series draws to its conclusion. It’s all about those last few things you want to know, as well as a good final battle obviously, so this is what you want four volumes away from the finale.