This game is also played on ANN and can be lots of fun and a challange on the old anime memories strings.

The point is.... you guessed it. If you guess the name of the character shown in the picture, you in turn will post your own anime character for us to guess, and so on. Name the Anime the character is from too if you can, but only the character name is needed to win.

NO FAN ART. It has to be a legit picture of the character.

You can also use spoilers if you like so as people can still guess at home even if the answere has already been given.

Who can anyone tell me who this is...

Also if someone takes a guess at a picture but they aren't told whether they are correct or not within 24hrs, then they can post another picture so the game doesn't come to a halt.

i seriously haven't got the foggiest

Sorry, thought this was quite an easy one to start. Any Tenchi fans out there? :wink:
M

CORRECT!!! I was just about to put an easier one up too ^^

We done dude, your go

OK hopefully someone can get this one

I'm looking for someone to tell me who the one in white is
(pain in the ****, only pic i could find on the web) 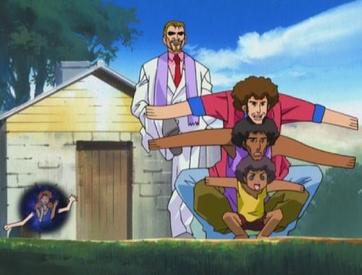 Is it That Man?

So its over to you Voddas

Rules say only the name is needed. AND I started this game!!

It's That Man from Excel Saga :wink:

Is she from monster?
L

Lelouch said:
Is she from monster?
Click to expand...

She's from ghost in the shell, just watched it on T.V

Lelouch said:
Is she from monster?
Click to expand...

She's from ghost in the shell, just watched it on T.V
Click to expand...

Need a name for the win boyo...

Your making it easier for others...

but if its from GITS, could it be Motoko

Sorry Otaku-san it's not Motoko Kusanagi.

We have the anime down but who is this characters peops?

I know its the prime minster, but her name is on the tip of my tongue

BlackWolf said:
I know its the prime minster, but her name is on the tip of my tongue
Click to expand...

Everyone seems to have the correct character but no name. You all use the net people... :roll: