An Interview with Masaaki Yuasa (Night is Short, Lu over the Wall)

On 4 October 2017, anime fans across the United Kingdom will be basking in the absurd joy of Night is Short, Walk on Girl – a seductively surreal and delightfully eccentric feature from the same creative minds that brought us The Tatami Galaxy. This won’t be the only film from acclaimed director Masaaki Yuasa (Kick-Heart, Ping Pong) however – as the magical mermaid tale Lu over the Wall is set to follow shortly after on 6 December 2017. With both films earning top prizes at international film festivals (Annecy for Lu over the Wall, Ottawa for Night is Short, Walk on Girl) and more importantly, being personal favourites of mine, I couldn’t turn down the opportunity to talk with the man himself, Masaaki Yuasa – an opportunity kindly offered by distributor Anime Limited and Fetch Publicity.

On the Monday following Night is Short, Walk on Girl‘s Scottish premiere and mere hours before its English debut, I was invited to a hotel in the heart of London where, seated across a conference room table was an award-winning director with an army of staunch fans, yet a demeanour calm, welcoming and friendly – Masaaki Yuasa. I’d thought of more than enough questions to fill an entire interview for each film, but with an allocated time slot, I only had so much time, so I began.


Note: The following interview was assisted by an interpreter, then edited for clarity.

Anime UK News: Thank you for releasing not one, but two great films this year. How did you balance the production of two completely distinct movies?

Anime UK News: In 2010, you adapted The Tatami Galaxy – also by Tomihiko Morimi. What inspired you to return to his works with Night is Short, Walk on Girl?

Yuasa: Actually, it’s a trilogy. So, there’s a first one and then The Tatami Galaxy is the second and Night is Short, Walk on Girl is the third in the trilogy [Author Note: Thematically. They can be enjoyed perfectly standalone]. So when I was making The Tatami Galaxy, I was actually thinking of Night is Short, Walk on Girl – which is actually quite “pop”. All the three stories have similar tastes, but I think Night in Short, Walk on the Girl is the most “pop” – fun thing. So when I got to Night is Short, Walk On Girl – finally, I get to make this! Because I wanted to make this movie. It’s a bit like Star Wars, where we made the second and third first – and then hopefully we’ll make the first at some point.

Anime UK News: Unlike most romances, neither Senpai nor the Girl with Black Hair are given names – was there any special significance behind this decision?

Yuasa: Well, because the original story’s like that – they don’t have names. In The Tatami Galaxy, the main character is “I”. There’s a genre in Japanese literature called “First Person Stories”, so I imagine that in that way, people can empathise with the main – or any – characters. It’s nobody, but it’s everybody. 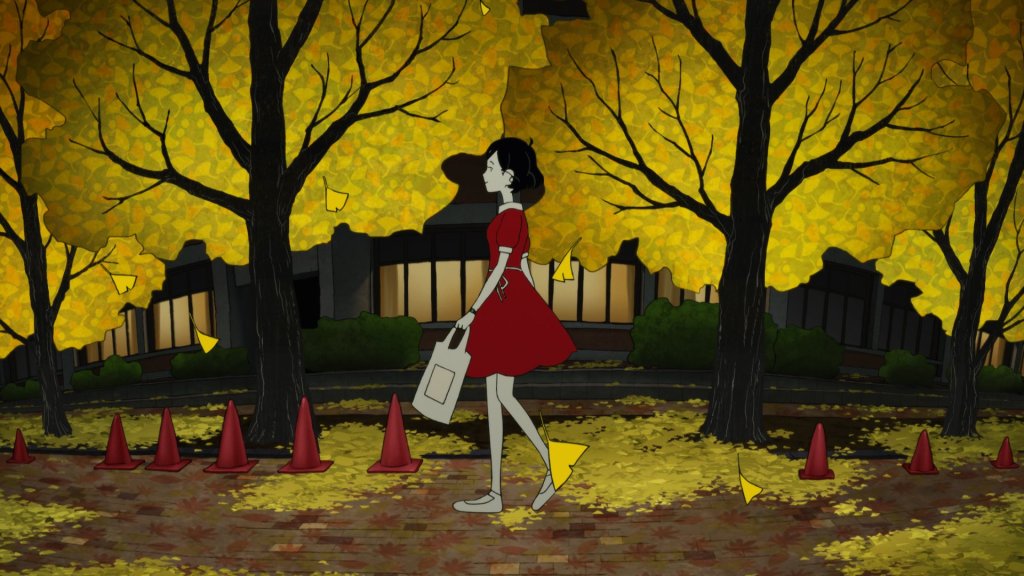 Anime UK News: Coincidence or fate, “connections” is a recurring theme in Night is Short, Walk on Girl, but do these chance encounters hold any particular significance with you?


This is amazing, right? I normally live in Japan and you’re living here [London], and we’re talking at this time today. I just like the thought of it – it’s amazing too.​
Anime UK News: With Night is Short, Walk on Girl being an adaptation and Lu over the Wall an original film, what would you say the pros and cons of each film-making approach are – and is there one you prefer?​
Yuasa: I used to like originals, but I think I like both now. In the case of adaptations, I read it, I like it – so how do I express this story in animation? If the story – the book – was a good selling product, I don’t have to worry about things too much, it should sell [laughs]. So I just have to concentrate on my work; that’s quite nice. But when I’m doing original stories, I worry more whether people like, if I have to change this or that, so I tend to struggle more.​

Anime UK News: You’re known for diverse, quirky visual styles, but did anything serve as a particular influence for these films? For example, the dancing in Lu over the Wall feels evocative of classic Disney or Looney Tunes cartoons?​
Yuasa: Yes – exactly. That’s my inspiration! That kind of mad, high tension dancing. Y’know, if these Disney dances were made in Japan, they would be more subtle, but I really wanted to do that mad dancing thing. So yes, that’s my inspiration.​
I was actually really moved by these old Disney movies. So when I made Lu, I wanted to recreate what moved me as a child and I just really wanted to make something that I used to love.​
Anime UK News: Lu has a child-like nature and her father, a playful Totoro-esque demeanour, yet the film has a deeper, meaningful backdrop to it. Was this contrast deliberate?​
Yuasa: Yes. The target audience for the film when we started out was high school students, but obviously, I actually wanted everyone to enjoy it – kids and grown ups. So the viewpoint is actually from adults; like the characters are students, but students as we remember. So I think that is giving depth to the story as well.​ 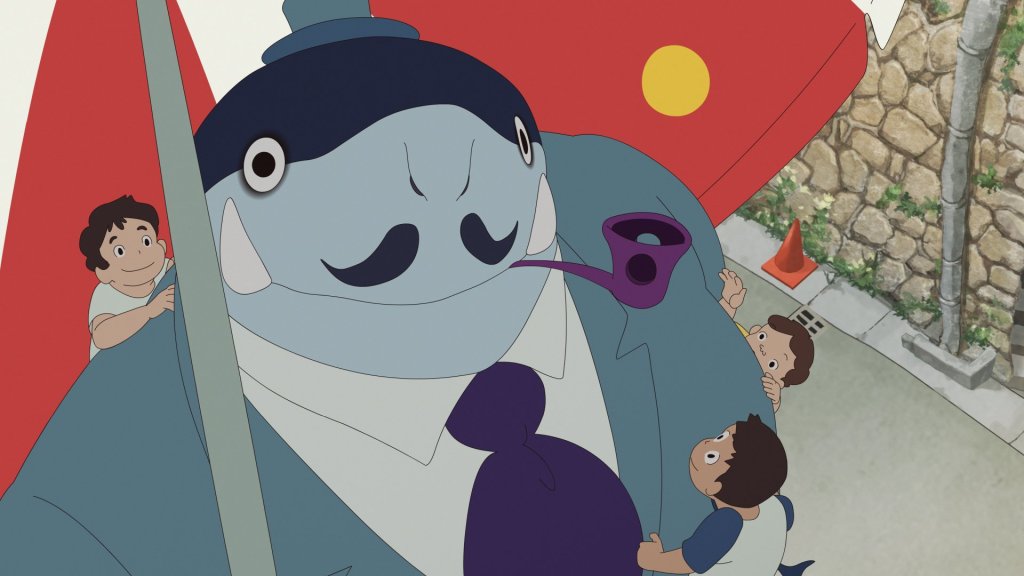 Pictured: Lu over the Wall


Anime UK News: The town’s feelings towards Lu and the children’s dreams fluctuate based on their desires – how do you feel this ties into the “fear of the other” and human nature?​
Yuasa: It’s a bit abstract, probably. But if you look at history when there’s a huge natural disaster; be it earthquake, tsunami or whatever, it would trigger human emotions like fear, for example. People want someone or something to blame – ‘this happened because of this’. You want to create some sort of reason, to rationalise your thoughts – basically creating scapegoats. I think that happens a lot in history, so then people lose objective observation completely and I think that itself is fear. I wanted to describe that.​
Anime UK News: Previously, you worked on the Adventure Time episode Food Chain. Would you be open to more western collaborations and are there any other examples of western animation you’re fond of?​
Yuasa: I don’t actually know many animations from outside Japan, but yeah – any opportunity that comes up, I would love to. My favourite, is Sing – it’s 3D, but it’s my favourite.​ 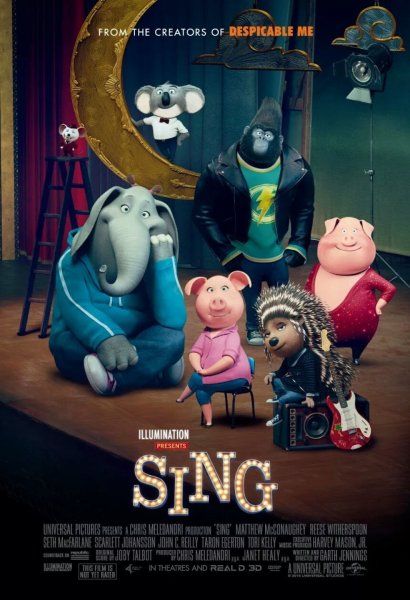 Anime UK News: Some say we’re amidst a renaissance of anime cinema. As someone experienced in both TV and film, do you feel as though the balance of the two mediums is shifting?​
Yuasa: I think the viewing styles have been changing over the last few years. I mean, people look at things on their computers, and then people go to the cinema – I think they go to the theatre like they go to concerts; it’s not like a classic, original movie-going any more. So I think the style has changed, yes.​
I think cinema-going is like an event and as people who go and see the same movie more than once; not just watching it on a computer and they’ve got a really high anticipation, so it really seems like they’re going to more of an event rather than going to see a movie.​
Anime UK News: Following the success of Kick-Heart, what are your feelings towards crowd-funding in the anime industry and would you be interested in similar future projects?​
Yuasa: I am interested, I mean it is a good way. Probably going forward, there will be more. It’s a bit like you’re selling a ticket – they’re buying first and then we’re making movies for them. But personally, crowd-funding might be an obstruction to commercial success; I am interested, but I don’t think I’d want to use it too much.​
Anime UK News: A number of your works include themes of youth or growing up. Is this coincidental, or a particular theme you like to explore?​
Yuasa: I’m trying to make different things, but then again yeah, I might be repeating myself. But it’s not actually intentional; so now that you’ve said it and I’ve looked back on things myself, probably … yeah, that’s a theme I want to deal with.​
Anime UK News: To finish off, with audiences here about to see both Night is Short, Walk on Girl and Lu over the Wall in cinemas shortly, do you have a particular message you’d like to pass on to my readers?​
Yuasa: Night is Short, Walk on Girl is a really fun movie – it’s about students, life and really fun, but there’s some meaning to it. It’s a really fast paced film – so buckle your seat belts! Lu is my original story, so it’s not terribly known, but it’s fun I hope and I made it for everybody, so please go and see it!​
Anime UK News: Thank you very much.​
Yuasa: Thank You.​
Anime UK News: I’m looking forward to the last in the [Tatami/Night is Short] trilogy!​
Yuasa: [Laughs]​

Night is Short, Walk on Girl will be released in select cinemas on 4 October 2017, courtesy of Anime Limited and National Amusements. Find your nearest showing at http://www.thenightisshortmovie.co.uk.​
Lu over the Wall will be shown as part of London Film Festival on 14-15 October, before a nationwide release on 6 December 2017.​

About Night is Short, Walk on Girl:​
Gracefully yet violently, The Girl with Black Hair (Kana Hanazawa) swirls through the abstract Kyoto night a joyful tempest. Blowing through pub crawls, festivals and book fairs, her youthful glee infects parties of increasingly eccentric characters, but amongst the debtors, existentialists and the God of the Old Book Market, can she be convinced “coincidental” encounters are fate and will she notice the Senpai (Gen Hoshino) in pursuit of her love?​
Whether the hands on your clock move fast or slow, Night is Short, Walk On Girl.

About Lu over the Wall:

Can a shared love overcome the fear that divides us?

Following his parent’s divorce, high schooler Kai (Shōta Shimoda) moves to his father’s home in a rural fishing village, whose superstitions about mermaids force the young man to repress his desire to make music. When his classmates force him to join their band however, their melodies attract the affections of Lu (Kanon Tani), a mermaid whose joy will reveal that superstitions are just that and being different doesn’t mean we’re not the same.