Kei Negai is a seemingly normal teenage boy who aims to becomes a doctor and a ‘upstanding human being’, but fate has other plans. One day after school he’s hit by a truck and killed instantly, but then comes back to life and discovers he’s an Ajin – a recently discovered new breed of demi-human that cannot be killed and that the government are hunting down to experiment on. Now with a bounty on his head, Kei must run and hide from the public, the police and the government to find other Ajin and somehow live a quiet life. But are the Ajin just as bad as the very humans that wish to hunt him down?

If I had to quickly summarize the show to sell it in an elevator pitch, then I’d say that the show is a cross between Tokyo Ghoul and Elfen Lied; all of them have the premise of humans living among a new, unknown breed of mortals but handle it in different ways. Ajin seems to follow Tokyo Ghoul’s route at first with one human boy suddenly discovering he’s not normal anymore and having to hide who he is whilst trying to discover his new place in the world. But Ajin also takes pages from Elfen Lied’s book by showcasing the darkest pits of humanity including torture, gore, terrorism, and sociopathy. There’s even a demonstration of unique powers from the ‘others’ using 3D animation (but to a much better degree than Elfen Lied ever did). That’s not to say that Ajin is completely devoid of its own ideas however, although fans of said shows will most likely find this anime appealing, Ajin does enough to give itself a different flavour. The most interesting (and biggest draw) is the handling of the demi-humans and their mythology; on paper it’s a very simple concept: immortals that can regenerate immediately after dying. There are a few ‘variants’ who have additional powers, but for the most part it seems like a mundane skill. However, the way the Ajin demonstrate the gifts in practice, how they can recover mid-battle and the repercussions of regenerating from larger attacks make the numerous action scenes a gripping experience. You want to see how far they take it, in what ways these characters can handle the most devastating of attacks and just keep going. Also, the way they describe how their variants’ special powers work, using logical scientific terms to explain their phenomena, shows that the original creator thoroughly nailed down the full details of the ‘others’ before committing them to paper. This, combined with a clicker sound (like in The Last of Us) that the Ajin give off when they come back to life, means that watching the series unfold, discovering more of their powers and those who wield them, makes for a satisfying experience. 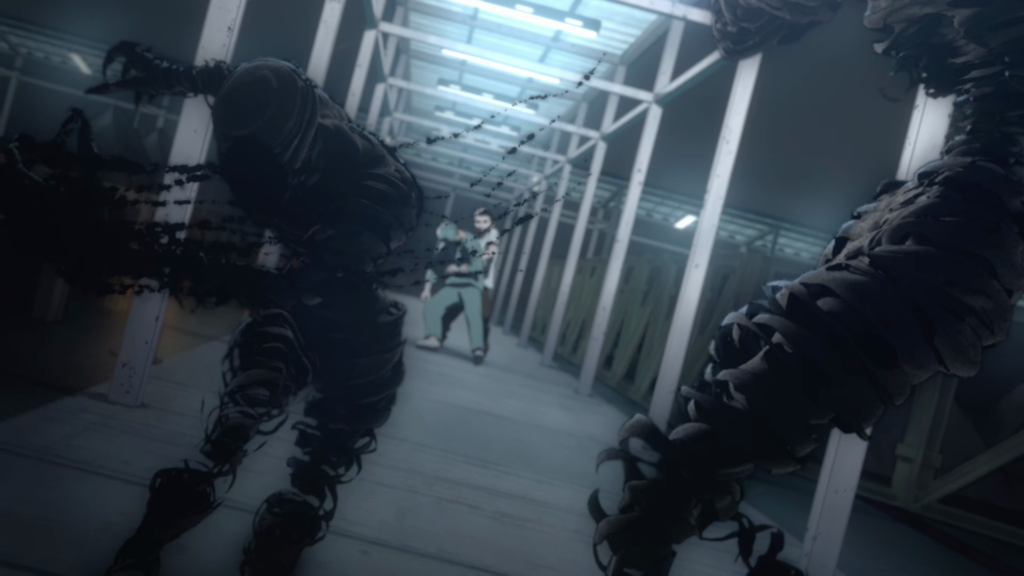 As the series’s main draw is watching how these Ajin die in excessively horrible ways, there’s definitely a macabre aspect to the whole show and this carries over to the main cast. Kei starts off as your typical everyday hero who just wants to be normal, but as the show becomes increasingly more dark and sinister, so does our hero, as he reveals a side to him that in most anime leads would be considered villainous. To avoid spoilers, I won’t say what, but to go in this direction helps the lead stand out a bit more amongst his peers. However despite the anime’s attempts to foreshadow it, the turn of events still feels like a sharp swerve in a new direction. This is due to the original story’s writer leaving very early on in the original manga’s creation and the artist taking over, leading to the story’s focus and the lead male changing drastically. It’s a gutsy move but not one that completely pays off in the long run. Not just because Kei becomes a darker character, but because he’s already surrounded by morally ambiguous people – from the extremist Ajin leader Sato, to the money-driven government personal Yu Tosaki – there’s little-to-no wiggle room in terms of character variety, there’s no comic relief or straight-up ‘good guy’ or an outsider voice that isn’t already full of hatred or anger. Creating a dark story or having a cast filled with morally ambiguous people are not bad things by themselves but they have to be written carefully, otherwise you’ll end up with a cast you cannot connect with or a story that just seems out to earn sympathy cynically through its darkness. Take, for example, Marvel’s The Punisher (don’t worry, I won’t go into spoiler territory); that too is a series that deals with a lot of dark themes like the horrors of war, PTSD and terrorism, and the main lead is an angry, revenge-fuelled type of guy with a shoot-first-ask-later attitude. But he’s almost always paired off with someone who has a much more flexible range. Even when he’s with other darker characters who also have a lot of emotional baggage, they all ACT differently from mentally unstable to confidently suave. It’s that diversity that keeps the series dark but not overbearingly so; there are different shades of darkness that complement each other but offer variety. Ajin, however, does not and runs the risk of becoming a very hard watch; it feels like a struggle to get through the events, not because of what’s happening on screen but because it’s difficult to care about the struggle that’s supposed to be unfolding.

Animation is provided by Polygon Pictures, who have a lot of experience with providing 3D animation from Disney XD’s Tron: Uprising series to Studio Ghibli’s Ronja the Robber’s Daughter, and whilst the 3D style makes Ajin stand out among the crowd, it’s a mixed bag in terms of visual splendour. The character designs are fine but they lack facial animations, so most of the cast have the same face pasted on them with dead-pan eyes not helping to sell the mood they’re trying to convey. It’s a shame because there are lovely 2D backgrounds, and they even use 2D for flashback scenes; compared with the original manga panels it’s a lot more dynamic than the stiff 3D models they went with. 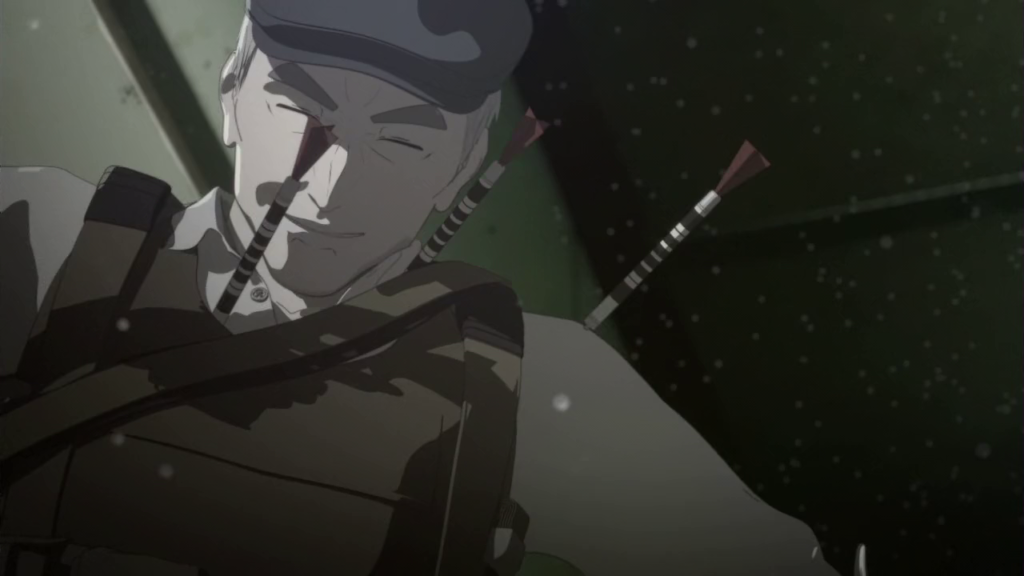 Netflix licensed the series, so you can expect a competent dub in the set; there’s the original Japanese with subs, Spanish and English dubs to enjoy. The English dub is mostly serviceable with Johnny Yong Bosch in the lead and other heavy hitters such as Bryce Papenbrook and Cristina Vee in the mix. The weakest link however is Pete Sepenuk as Sato; his voice is very one-note, keeping his growly monotone for the majority of the performance. It works in some scenes but hearing it never wavering in tone aside from one or two scenes does grate on the senses very quickly.

Season 1 of the series is available on DVD and Collector’s Edition Blu-ray; extras include clean opening and closing, ads for other Sentai Filmworks anime, and a ‘behind the scenes’ look at the animation process where it plays a scene in Episode 6 and shows all the different layers of the 3D animation, which creatively is nice to see. Also on the very last disc of both the DVD and Blu-ray copies you’ll find an extra treat: the first Ajin movie ‘compel’, which is basically just the first 6 episodes streamlined into a 2-hour movie with no added scenes or dialogue that normally comes with movies such as this. I’d recommended saving a watch of this until Season 2 is drawing near so you can remind yourself of what’s happened before it’s release. It should be noted that the movie is NOT dubbed, only Japanese with subtitles, which is fine for the most part aside from the ending song in which subtitles are only provided for the first verse and chorus, then abruptly stop. Did the translator suddenly get lazy and think no one would notice?

Ajin: Demi Human is a series that deals with many gruesome themes with excellently thought-out mythology and unique animation, but the largely dour and gloomy cast with little variety will be the deal breaker for most. If you’re a fan of similar series such as Tokyo Ghoul and Elfen Lied then you’ll likely find something worthwhile in this series. However, if you like your anime to have the darkness balanced out with positivity, then I wouldn’t recommend it. 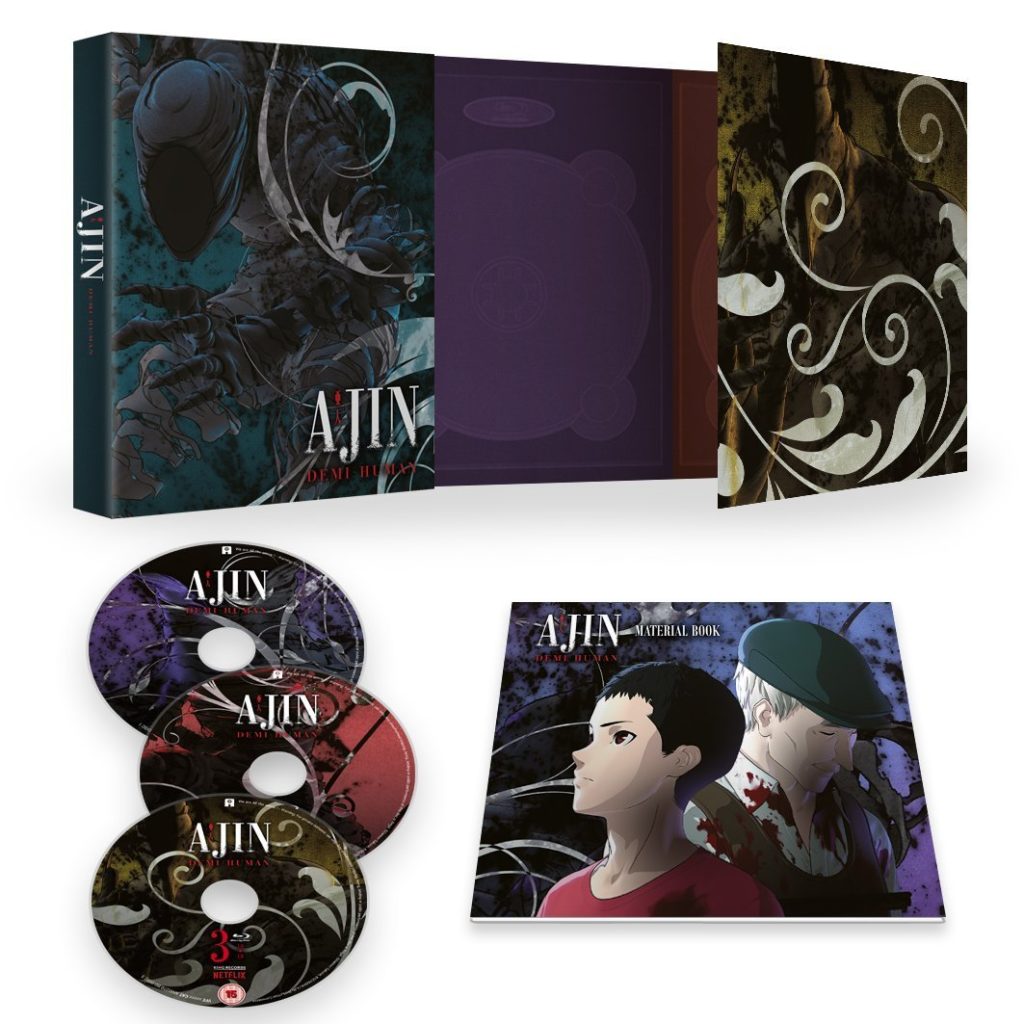